Later today, I’m on a ‘virtual’ writing weekend. Part of the preparatory work was to write a 16-word poem about a place on the coast, but not about Whitby – which is where we will be based ‘virtually’. That brought back memories of my many visits to Southwold in Suffolk. The expensive beach huts there are legendary. The smell of beer brewing at the local Adnams Brewery is an acquired taste!

Several times we rented Shrimp Cottage, at the front. Whoever stayed in the main bedroom on the first floor, had a view of the sea from their bed. We were the women I met on holiday in China, as one of our regular reunions. I’ve also stayed there with friends from Manchester and, twice, my brother and his family in the Netherlands got the ferry to Harwich and made the short drive up the coast.

I visited Southwold in all seasons. There was just one house between Shrimp Cottage and the Sailors’ Reading Room – a Grade II listed building from 1864 and still a refuge for sailors and fishermen. Another forty footsteps took us to the Lord Nelson pub. The poem is included in my second collection Nothing serious, nothing dangerous, published by Indigo Dreams Publishing Ltd  in November 2019.

Nautical miles
The sign outside the Sailors’ Reading Room is

Across the horizon, they are less than a hundred
nautical miles from Southwold in Suffolk

where the narrow beach of pebbles –
grey, brown, black mostly –

is held together
by couplets of groynes, slimy green.

Both our languages have the word strand. 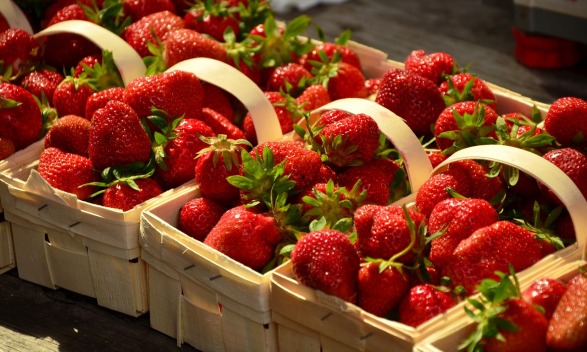 The first June weekend here in Holland is wet and windy: a perfect time to remember strawberries. My local supermarket has them on special offer this week, along with discounts on raspberries and watermelon.

During my childhood I lived in a small town further north, a couple of miles from the beach, and also close to the chimneys of the steelworks. Walking home from school my friend Nellie I and would take the long route, along the small harbour. We would pass the rear entrance to the covered market. I have a vivid image of a line of small horse-drawn carts, loaded with punnets, punnets full of strawberries …

The poem is from my second collection Nothing serious, nothing dangerous (Indigo Dreams Publishing Ltd, 2019).

The strawberries of my childhood
were like my favourite grandmother,
soft, a rosy smell, a taste that stayed
with you on the way to school.
Those strawberries were red,
not like the winter swedes
which are a red stone,
are purple with anger.

Strawberries entered our home
first in paper bags, then as June grew
in oblong wicker punnets. Then we ate
them for breakfast and for lunch, pressing
them with a fork on sliced white bread.
You could stroke the strawberries
of my childhood. They were company,
like cats, purring gently even when asleep.
Small green stalks their whiskers, and warm.