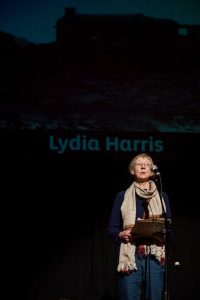 A knock-out title for a poetry book, I should say. Lydia Harris and I met on the Poetry Business Writing School in 2012, the year Smiths Knoll published her pamphlet.
The others are glad not to be the corpse is the first line of a poem with the title
We make a video  on All Saints, North Street for English Heritage.

Many of Lydia’s poems have this filmic quality. They’re typically condensed narratives, with arresting first lines, and slivers of telling monologue or dialogue. They are also a masterclass in choosing titles. Could you resist I couldn’t ask if he was glad he’d married me; Widow to step-son; Lice-infested sea trout; Oxygen mask? The next poem is a delicious example:

The rolls arrive at the Inchnadamph Hotel

She doesn’t say ‘I never should have married you’,
instead tries I’ve cleaned our tennis shoes.
He spots the van through his binoculars,
the rattle on the cattle grid alerts the lad who helps.

The rolls brim with themselves,
two each, in baskets on the tables,
they smell of steam and Morag’s overall,
the early morning shuffle in the bakery.

A twist of butter opens out, floats on cloud.
Perhaps I’ll find a horseshoe charm, a wind-up bird.
She reaches for the marmalade.

I’d like a Harvey’s Bristol Cream, he says.
Tonight, she laughs, at five.

The day’s a swing-boat,
red plush seats, a fringe of gold.
He’s helped her in,
pulled the rope to make it rise.

Shortly after we met, Lydia moved to Scotland. She has made her home on one of the northern Orkney islands, a small but vibrant community. Recently, her pamphlet of Westray poems An unbolted door was published. I’m very pleased I can share a few poems from the book here. Lydia’s website is homeabout.co.uk 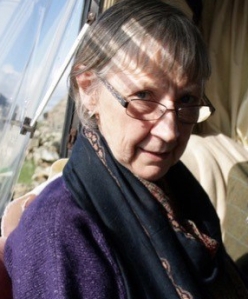 How to Approach the Pier

With a bowline tied to your monkey-fist,
with your heaving-rope coiled sun-wise,
bow to Faray, engine in reverse.

With your stern door lined up to the ramp,
to starboard, the quarry, slumped
where the stones for the pier were hacked free.

With outlines of Wideford and Keelylang
papered on the skyline. The tide running high
and the wind southerly.

With trails of foam in your wake,
Geldibust to port. With the stanchions easy,
hung with tyres.

With a route pressed to your palm,
in your pouch, the honed spoon
and that knapped flint from Howar.

Jeemo Services My Van in January

He keeps spare bulbs in a fridge,
cattle in the byre next door,

spreads shafts and flanges
round the anvil
like the gaming pieces
and spindle whorls from Scar,

the woman who bore them
so long dead
she’s in the sky
over Ouseness at night,
unravelling her skins.

From the Box Bed

Our sheets are sails on the sweet hay sack
and we sail to the moon with an ebb and a flow.

Your hands smooth my throat in the starlit room,
there’s nothing to say but the brush of flesh.

My lips drink your breath and the tide is in,
the clock on the wall makes the only sound

but for the air as it leaves your lungs,
sweeter than scallops from the pan,

for where has it been,
inside your skin and I take you in.

1 thought on “Glad not to be the corpse”