This year I have been sending far more poems out and so it follows logically that more will be rejected. Of course, more will be accepted by magazines and successful in competitions. That’s all about “hit rates”. So far this year, ten poems have been published or accepted for publication – anthologies, magazines, competition anthologies.

But the rejections sting. The other day there was a terse two-line email from a magazine: Not what we’re looking for at the moment. Contrast that with the editors of Strix. The magazine was nominated for the prestigious Saboteur award: more sales, more submissions. They went to the trouble of sending separate emails to the people whose work had been shortlisted for issue 4. From 926 pieces submitted, 44 were shortlisted. I had made it that far and it was good to know.

Before I retrained as a psychotherapist, I worked in various consultancies. A rejection was always reframed as getting closer to an acceptance. We needed reminding that a day of paid work typically went with two or three days of unpaid work: marketing, PR, admin, training and development, travelling, etc.

My poems are “tied up” when they are out with editors and competition judges and “free” when they’ve not been chosen.

I have a simple Word table with poems in alphabetical order, a To Do list with details of magazines and their submission windows, and a list of magazines that are new to me. I also have an A4 folder that holds competition leaflets in plastic wallets, organised according to deadlines.

As soon as I know that a poem is “free”, I make the decision as to where it will go next. I aim to send it out within one or two days. Many submissions now are by email or the Submittable portal, so it’s easy.

Yes, I allow myself a bit of a moan in my diary, but that’s in a separate room from where I write.

All the research on what makes for successful Sales people quote the P-word. Zen and the Art of Motorcycle Maintenance clocked up 121 rejections and Chicken Soup for the Soul was rejected 144 times. The American poet William Stafford wrote a poem a day for many years. Apparently, he had a hit rate of 1 : 7, so that’s a poem a week.

Compare yourself with yourself, not with others

Many years ago I read some very interesting NLP (Neuro-Linguistic Programming) research. Modelling has always been at the heart of NLP. What is that successful people do? What are their attitudes, values, beliefs? What do they say to themselves?

This research looked at sportspeople who had been seriously injured (during practice, performance, or outside of their sport, e.g. traffic accident). The group examined were those who after their operations, stay in hospital, rehabilitation, etc. were stronger and fitter than before the accident. They did two things: they took it a day at a time and they compared themselves with themselves, not with others.

Keep your successes within reach, within sight.

Especially for those of us who’re the “responsible workaholic” type with a perfectionist streak, it’s natural to focus on what’s missing, what’s not right. Successful poems used to get deleted from that Word table to make sure they weren’t accidentally sent out again. Now I have them on top of the table, in bold print. A great reminder.

I also have an A4 folder with letters and emails from editors and competition organisers, certificates. My own work is on a shelf in a bookcase in the room where I write. The picture is of a competition certificate. It was one of my earliest successes (1988) and I was thrilled to receive it. I framed it and put it on the hall wall, at the bottom of the stairs. 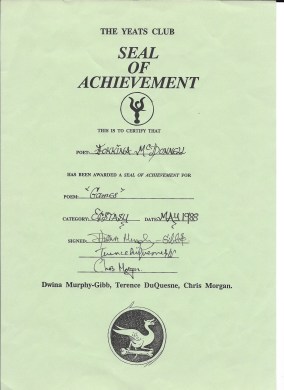 I’ve started writing and sending out flash fiction and I greatly enjoy blogging. Since closing my practice I have more time for and energy for writing and for sending the work out in the world, but I was becoming too attached to the outcome. It’s good for me to not have all the eggs in one basket.

Zen and the Art of Submitting Poetry

Chase after fame, however, and you put your life
into the hands of others:
They will tip you between hope and despair.

Aim, then, to be aimless.
Seek neither publication, nor acclaim:
Submit without submitting.

The poem is by Cameron Self and it’s on the Literary Norfolk site.