My third collection Remembering / Disease has just been accepted by Broken Sleep Books for publication in October 2022. The manuscript received a Northern Writers’ Award in June 2020 from New Writing North. The poet Vahni Capildeo judged the poetry entries and they praised the ‘beautiful minimalism of the submission’. Below are details of my three earlier poetry books.

You can purchase my second collection Nothing serious, nothing dangerous from Indigo Dreams Publishing. 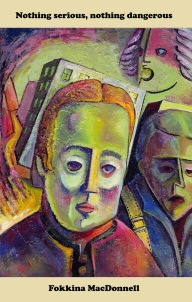 “The strength of Fokkina McDonnell’s airy and enjoyable second collection lies in her command of an idiom sufficiently fluid and flexible for her to explore widely without any sense of strain: and her awareness of the ambiguities of language can accommodate the mildly surreal as easily as the acutely observed and felt. She weaves a pattern of recurring threads – family and other relationships, a feeling for the natural world (a whole aviary, the sea, land creatures, a cornucopia of fruit) and locations from East Anglia and Manchester to Holland and China go alongside a keen appreciation of artists, with paintings triggering a number of the poems. Hers is a voice of light tones, but also measured utterance: gratifyingly, the result is greater than the sum of its parts.”

The striking cover painting is The Departure by the late artist Graham Kingsley Brown.

My debut collection Another Life was published in November 2016. You can purchase it at Oversteps Books.

“In these fine, often prize-winning poems, Fokkina McDonnell reveals her considerable imaginative range – sometimes sparely expressed but always with surprising switches of perspective and point of view. Underlying all her work is expert control and technique, the result of many years studying the various poetical forms. This is an overdue and enriching first collection, with incidentally a fascinating European edge to her poetic voice and its exploration.” 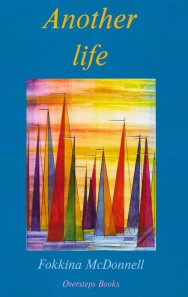 “Fokkina McDonnell’s poetry has a strong sense of place and a deep humanity lightened by touches of a wicked sense of humour. Here are poems which travel, in reality or in the mind.”

“There’s a delicate intimacy in Fokkina McDonnell’s poetry. She catches moment, place, character and feeling with poignantly crafted simplicity. There’s wit and humour – then, with deft, economical choice of detail, there are unforeseen swerves that reach the heart.”

In Spring 2020 a pamphlet A Stolen Hour was published by Grey Hen Press. The sculpture on the cover is by Henry Moore and can be found at Snape Maltings, Suffolk.

The pamphlet received glowing endorsements from the poets Carole Bromley and from Alwyn Marriage. They are also on the Grey Hen Press website.

“Having published Fokkina McDonnell’s first collection with Oversteps Books Ltd in 2016, I was delighted to see this pamphlet and enjoy more of her work. Poetry that reminisces about the past can sometimes fail to appeal in the present; but that is certainly not the case with this short collection, in which McDonnell entices the reader to enter fully into the event commemorated, to meet the person remembered, or to appreciate the work of art she is celebrating. I felt drawn into each of her poems.”      Alwyn Marriage

“What a delight to read this latest pamphlet of poetry by Fokkina McDonnell, a poet I have long admired and loved. It is a strong and varied collection. There are poems which show evidence of the poet’s empathy and insight, others are concerned with childhood and family and there is a strong group of ekphrastic poems which are particularly impressive. Confidently written, with economy and precision, moving, witty. By the end, I wanted to start again at the beginning.”                                   Carole Bromley

I also have poems in a number of recent anthologies: